The Cornell EMCS is the result of an evolutionary development that began in 1964 when a manual monitoring and control system was installed to oversee the newly constructed central chilled water system and the several buildings it served. During the next decade, additional building systems were added and the chilled water plant operators, who also manned the EMCS, were able to monitor and control the on/off status of several hundred fans and pumps in about a dozen buildings. The manual system was computerized in 1975 through the addition of an IBM System/7 mini-computer. In 1977, an upgraded computer allowed, for the first time, access to digitally-encoded analog information (temperatures, pressures, flow rates, etc.) from both building and utility systems. The new computer was also user-programmable and permitted us to begin to develop our own application software. We began to use the computer to monitor chilled water data in 1980.

The "modern era" really began in 1984 with the installation of our first direct digital control (DDC) system in one of the dormitories. This was quickly followed by the replacement of the IBM system with a DEC MicroVAX which eventually evolved into the VAXcluster that gave way to a loosely-coupled cluster of Linux machines. Today, we are taking the next step toward "virtualizing" this cluster of machines in a set of host computers running VMware, allowing us a new level of flexibility and, ultimately, through the use of automated failover techniques, unprecedented redundancy and reliability. Through the years, support was added for numerous DDC types and today the system concurrently supports ten distinct communication protocols, all accessible through a common web-based user interface.

The primary functions of the EMCS are metering, monitoring, and interactive control. While the EMCS meters some steam and electricity, these utilities are still mostly tracked via meters that must be physically visited and read, although the pace of installing new network-readable meters has been rapidly accelerating in the last few years. The EMCS, however, is and has been the primary means of tracking chilled water production and distribution. We currently collect steam, electricity and chilled water data from nearly 300 locations around the campus and, for many of these locations, have readings on-line that go back many years. This information is fed into our Utility Data System in order to bill the responsible campus departments and for performing various energy analyses. Much of the meter data is now also being fed to a publicly accessible "dashboard" that has been rolled out to the campus community in an effort to raise awareness of energy use.  (Learn more about the Big Red Energy Scoreboard.) Monitoring is done both passively, by routinely observing system operation on an occasional basis, and actively, by responding to any of the tens of thousands of computer-generated alarms that are currently defined. In addition, operators can interactively make adjustments to binary and analog parameters (setpoints, alarm limits, schedules, interlocks, etc.), DDC programs, and physical output points that control motorized fans, pumps, dampers and valves.

The EMCS operators receive, filter, and investigate on average about 110,000 alarm notifications per year, or about 300 per day.

Here is a summary of the EMCS field equipment deployed in 226 buildings as of January 5, 2016: 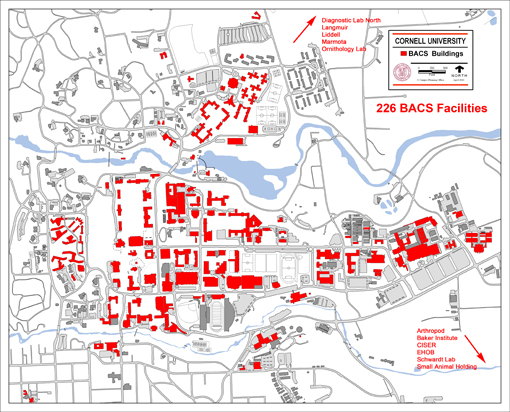 This conglomeration of field equipment supports access to over a million sensors, actuators and software parameters viewable via more than 1000 graphic displays. Because the EMCS is a node on the Internet, it can be accessed remotely by any authorized user with appropriate credentials.

The EMCS is based on a distributed computing architecture and the use of web-based technologies for user interaction with the system.The distribution involves a set of Linux-based "front-end" processors, both physical and virtual, that each communicates with a dedicated set of field hardware using that hardware's communication protocol. The Linux cluster is collectively referred to as the "Cheese Shop" (CS) (since each computer has been named for a type of cheese) and each individual machine is called a "brick". The CS carries out the routine polling of field equipment status, the collection of time-based metering data, and the collection of 15-minute interval trend data for diagnostic purposes. The processors also respond to change-of-value and change-of-state notifications and pass them on to the alarm processing software for further evaluation. The machines communicate with each other and many of the field devices via the Internet Protocol. A few of our remote buildings are tied in via microwave, spread spectrum radios, or cellular phone connections. Future field equipment will either use an existing protocol or the ASHRAE/ANSI/ISO standard protocol BACnet, developed, in large part, by Cornell personnel. In the summer of 2012, we began to implement VMware virtualization of both CS machines and vendor-proprietary servers and now have over one hundred virtual machines running on six VM hosts, three at EMCS and three at the Central Energy Plant.

Each brick has a MySQL database common to, and synchronized across, all the bricks and specialized communication software that implements the protocol of the related field hardware. The database contains the "objects" are manipulated by the system. There is an object, for example, for each field device in the system, each system user, each set of trend information, each binary or analog point, and so on. The database synchronization ensures that there is no single point of failure since each brick contains a complete instance of the entire database. Each brick can continue to communicate with its associated field equipment, monitor alarms, log trend data, etc., in the absence of the other bricks. All CS functions are available using password-authenticated web browser access. The graphic displays are based on Scalable Vector Graphics and are editable using the Microsoft Visio graphics program. The user interface features new web logging and "Wiki" interactive technology that allows us a greater degree of knowledge "harvesting" and management than has ever been possible before.

Finally, the EMCS leverages vendor software and services for field equipment configuration and programming, some additional graphics, trends and reports, and other vendor-specific functions.